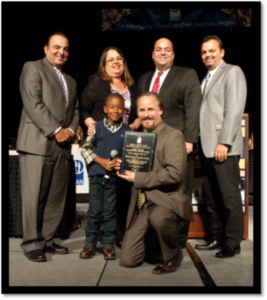 Our founder, Bryan “Eddie” Nash, was named the 2013 recipient of the Frank Vicencia Champion for Children’s Award. The award was presented at the Inter-Agency Council on Child Abuse and Neglect (ICAN) Nexus Conference on October 16th 2013. The prestigious award is given annually to someone who is committed to the prevention of child abuse and neglect. Last year’s recipient was Father Gregory Boyle, founder and Executive Director of Homeboy Industries.